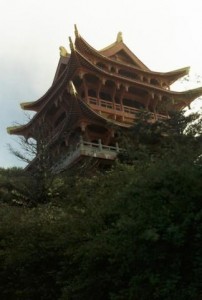 Kunlun Mountain, Bladder 60, is the Fire point along the Bladder meridian, a water official. In China, the real Mt. Kunlun is one of 228 peaks that make up the Kunlun Mountain Range.

The Kunlun Shan extend for over a thousand miles (2,500 km) in remote Western China. Situated halfway between the Himalayan Mountains and Tian Shan, Kunlun Shan runs east to west, beginning in the Pamir Mountains of neighboring Tajikistan and becoming progressively more narrow as they travel west dividing the province of Xinjiang and Tibet before ending in the Sino-Tibetan Mountains of the Qinghai province. To the south, the mountains look upon the highest and least-populated part of the Tibetan Plateau. To the north, the mountains view the hyper-arid Tarim Basin.

The Kunlun Shan is often described as one of the most remote places on earth, and it is considered one of the toughest places in the world for humans to live. Like the acupuncture point, the Kunlun Shan represent a harsh blending of the Fire and Water elements. This region is considered the “Alpine Desert” of Central China and suffers from severe drought and strong, persistent winds. Although temperatures are bitterly cold and a hard frost occurs almost every night of the year, rainfall is sparse and comes only in the form of rare snow that melts and evaporates off almost immediately under the intense and scorching sun. Even the lakebeds, which typically exceed 5000 meters in elevation, are dried out, and the salty soil can support only the hardiest of spruce trees and juniper shrubs that grow on the north-facing slopes. A permanent snow and glacier line begins at about 6,000 meters.

Despite these harsh environmental conditions, Kunlun is the home to some of the rarest animals and mineral resources in China. The Kunlun River region, which originates out from Heihai (the Black sea), is the ideal home to exotic birds, wild donkeys, sheep and brown bears.

Precious jade and white marble can be found within the caves of Kunlun. Hotan or Hotien jade which originates from the dolomitic deposits of the Kunlun Mountains was discovered in the Yin ruins of inland China and tell us that the Silk Road was established in the 2nd century B.C.E and cut through the Kunlun Mountains as far back as 3000 years ago. A few years ago, while digging to build the Qinghai-Tibet Railway through the mountains, 30 stoneware pieces from the Microlithic period were discovered, indicating that prehistoric man lived in and around the mountains 30,000 years ago. Similar stoneware and signs of prehistoric cultural hubs had already been discovered in Tibet and Inner Mongolia, thus indicating that the Kunlun Mountain region also was a major source of Chinese civilization.

Despite their remoteness, the Mountains have continued to be an intriguing draw to different aspects of Chinese population. For example, research shows that this is the area where Taoist rites were conducted during the late Yuan Dynasty from 1271 to 1368.

Amnye Machen Mountain and its main peak, Machen Gangri, which stands 6,282 meters above sea level southeast of Qinghai, is the beginning of the Yangtze, Yellow River, also called the great mother river of China. The snow that melts from this area of the Kunlun Mountains flows down into the river and it is because of this that the Kunlun Mountains are considered as sacred area. In fact, Mt. Kunlun is the symbol of China and is often referred to as the “Forefather Mountains in China”, the “backbone of China” and “the ancestor of Chinese nation”. In fact, the peaks of Kunlun were written about in many of the ancient Chinese classics such as the Classics of Mountains and Rivers, Commentary on the Waterways Classics, and Canonization of the Gods (or Gods and Heroes).

Myth lore believes that Xiwangmu, a powerful goddess known as the Queen Mother of the West or Empress of Heaven, lives in the Kunlun Shan. Ancient murals tell stories of the gods in Yeniugou, the wild Bull Ditch of Kunlun. 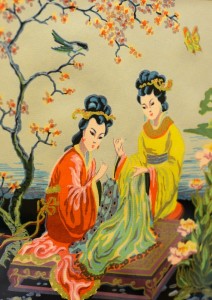 The legend of one of China’s biggest annual holidays, Zhong Qiu Jie or Thanksgiving, takes place within the Kunlun Mountains and it beautifully illustrates the blending of the Water and Fire elements of this acupuncture point. As legend has it, there were once 10 suns in the universe and their heat was scorching the earth and drying out the land and seas so that no food could be harvested. A man named Houyi went up to the top of the Kunlun Mountains, where he used the arrow of the Gods to shoot nine of the suns out of the sky. On a return visit to Kunlun some years later, Houyi was greeted by Xiwangmu and she rewarded his good deeds by giving him a magical elixir that would allow him to become a god and live eternally. One of the ancient murals in Yeniugou shows Xiwangmu making this elixir with a rabbit. As the legend continues, Houyi did not drink the elixir for fear of leaving his wife behind, but rather asked her to hide it in their house. A greedy student of Houyi tried to steal the elixir one day when he had gone out again to the mountains. In desperation, Houyi’s wife drank the elixir to keep it from the student. Rather than go to heaven and leave her husband behind, the wife of Houyi went to the moon so she could always watch over him. That is why the moon is worshipped on Zhong Qiu Jie.

When we look at the Kunlun Shan’s geography and history, we can immediately understand its significance in terms of an acupuncture point. It is here that two opposite elements combine to form a powerful and unique physical location. Yet despite its danger, the Kunlun Shan has attracted the intrigue of the Chinese throughout history.

By utilizing the extraordinary circumstances of the area, many people have thrived and benefited from the treasures that Kunlun has to offer. Like the Bladder officials, the mountains of Kunlun contain and hold precious resources that can be tapped into to support the people and animals of China. The immense, fiery heat of the sun gives rise to the Yangtze, the life force river of the country. From the top of sacred Mt. Kunlun, we can truly understand the integral role that balance between the elements plays within nature and within our own bodies.